Communion on the Tongue 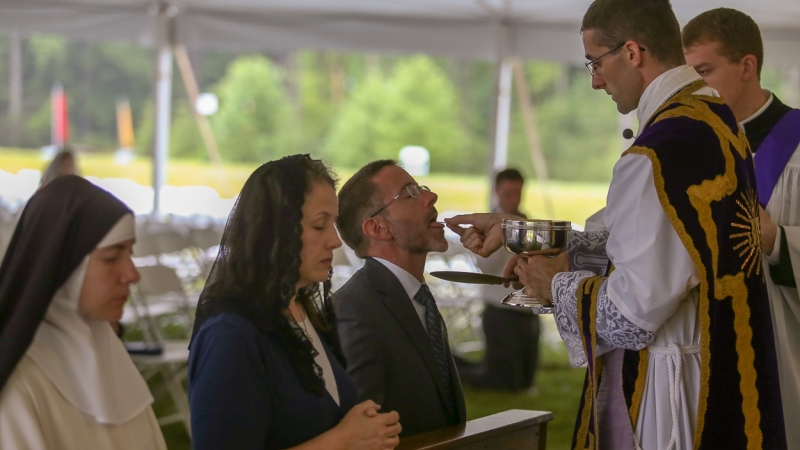 On one hand we understand the concern of Church authorities, to make sure that the reopening of churches will be done in a safe manner, and that all reasonable measures be taken to prevent the spreading of the Covid-19 virus.

But we have some serious concerns about the guidelines related to the distribution of holy communion, which says: “Upon the strong recommendation of medical authorities, Holy Communion is received only in the hand at this time. (Since each communicant has the right to receive communion either on the tongue or in the hand, the traditional practice of the option of receiving on the tongue will be restored as soon as the public health situation allows for that).”

Now, we heard that such prohibition is made mandatory in several dioceses of Southern Ontario - Toronto, Hamilton, and London - as far as I know. Even the priests who say the Indult or Motu Proprio Mass are being ordered not to give communion on the tongue, “for sanitary reasons”. Some priests that do not want to compromise with communion in the hand decided that communion will not be distributed to the faithful, while other priests, who say the Old Mass, are caving to the diocesan guidelines, and are giving communion in the hand at the Latin Mass.

So, what is the attitude of the priests of the Society of St. Pius X (SSPX), facing with the ban on communion on the tongue? The answer is very simple: we will never give communion in the hand but will always stick to the traditional rule of communion on the tongue! Let me explain why the SSPX priests stick to a rule, considered by the medical authorities consulted by the Archdiocese of Toronto as having a high risk of transmitting the virus.

First, there is no unanimity among medical authorities regarding of the risk to transmit a disease by the close contact of the hand of the priest with the tongue of the communicant. This is the opinion of the bishops of the USA, who do not ban communion on the tongue during the Covid-19 crisis: “We have carefully considered the question of Communion on the tongue vs. Communion in the hand. Given the Church’s existing guidance on this point (see Redemptionis Sacramentum , no.92), and recognizing the differing judgments and sensibilities that are involved, we believe that, with the precautions listed here, it is possible to distribute on the tongue without unreasonable risk. Opinions on this point are varied within the medical and scientific community: some believe Communion on the tongue involves an elevated and, in the light of all the circumstances, an unreasonable risk; others disagree.”1

Second, we have serious objections against communion in the hand, mostly for doctrinal reasons.

The traditional Catholic attitude and, I would say the only true Catholic attitude is that of the infinite respect which is due to the sacrament of the altar, something that is lacking with communion in the hand the way it is commonly distributed modern parishes. The difference in attitude is revealed in the very great attention formerly given to particles of the hosts. St. Cyril of Jerusalem exhorted the faithful to take care lest the least particle fall on the ground. “Take care that nothing falls on the ground. What you would let fall would be as the loss of one of your members. Tell me: if someone gave you gold powder, wouldn’t you gather it so carefully that none of it would be lost to your disadvantage? Should you not then be much more attentive that not a crumb be lost, which is much more precious than gold or diamonds?”3

Third, it may be objected that Holy Communion was distributed in the hand in certain parts of the early Church, but it was done quite differently from the way it is done today. Careful precautions were taken to secure the respect due to the Sanctissimum and, in some places, the communicant was requested to have his hand veiled. However, this practice of the early Church was discontinued a long time ago. With the rise of heresies like Protestantism, Church authorities came to realize the danger of losing the faith the Real Presence of Our Lord in the Blessed Sacrament, and communion in the hand was discontinued.

Fourth, let me answer one last objection “You are a Catholic priest. If the bishop gives order not to give communion in the hand, you must obey the bishop’s order. You think that you know better that the bishop”?”

Archbishop Lefebvre, the founder of the SSPX, gave us the answer. Back in 1975, he was found in a similar situation - not with the communion in the hand - but with the order to definitively close the seminary of Ecône, and to put to an end the work of the Society of St. Pius X, a work of restauration of the holiness of catholic priesthood. Archbishop Lefebvre answer in a respectful but strong manner:

“We hold fast, with all our heart and with all our soul, to Catholic Rome, Guardian of the Catholic Faith and of the traditions necessary to preserve this faith, to Eternal Rome, Mistress of wisdom and truth. (…) No authority, not even the highest in the hierarchy, can force us to abandon or diminish our Catholic Faith, so clearly expressed and professed by the Church’s Magisterium for nineteen centuries.
(…) The only attitude of faithfulness to the Church and Catholic doctrine, in view of our salvation, is a categorical refusal to accept this Reformation.”4

Faithful to their venerated founder, the priests of the SSPX keep all the good traditions of the Church and refuse the communion in the hand and other novelties that are dangerous to the faith!