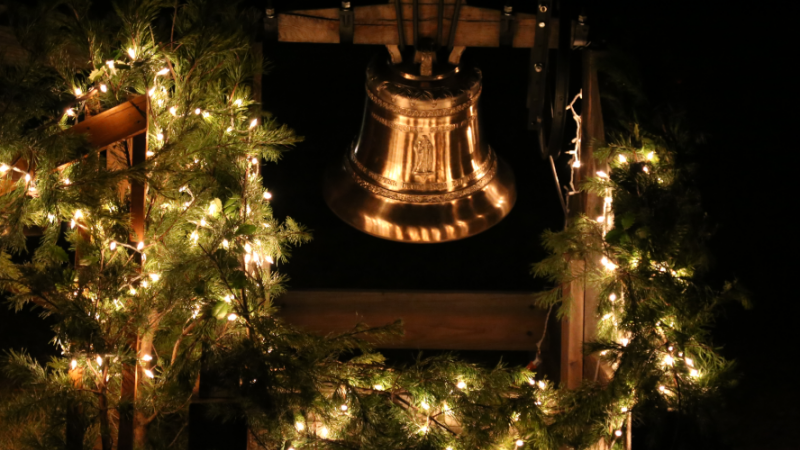 The very first thing that should come up to our minds, as we are heading to a New Year, it is to express our thanksgiving for the many graces received during the elapsed year. Graces are supernatural gifts of an invisible nature, but some of them have visible effects, of which we can give a report of the past year, 2019 AD.

At first, let us mention the pilgrimages: besides the usual Corpus Christi procession in St. Catharines and the Canadian Martyrs pilgrimage to Midland, some of us had the special blessing of going for a pilgrimage to the Holy Land.

Then, in the summer, we had the retreats and the camps, that give the occasion for several adults and children to get good refreshment both for the body and for the soul. With the good success of last summer’s retreats in New Hamburg, we are certainly planning to renew next summer.

Then, in the fall, we had the visit of some of some missionary priests from the SSPX, from South America and from Poland. Both gave enthusiastic reports on the international apostolate of the SSPX, as a proof that it universal, thus perfectly Catholic.

Meanwhile, some converts have expressed interest in the faith, and started to follow instructions since last September. Pray for these four young people who should be received in the Church next Easter.

On the material level, during the last quarter of 2019, we also launched a fundraising campaign in view of the acquisition of a larger church for the SSPX in Toronto, which will enable our priests to better serve the growing needs of the apostolate of tradition in and around the Queen City. The fundraising made a good
start in November and December, but there is still a long way to go. See further information below.

However, as we thank God for His many blessings during the Past Year, we ought at the same time to renew our contrition for the sins committed and try our best to be better Catholics in the New Year.

That is why, keeping in mind the positive points and of the weakness that are part of our life as Traditional Catholics, let me give some advices on the occasion of this New Year’s Day check-up.

At first, we should deeply thank God for the special blessing that God gave us in his goodness by giving us the grace of being Traditional Catholics. Thanks to the infinite mercy of God and His all-powerful grace, we carry in our hands a treasure, which is the treasure of the Catholic Faith, received from the priests, our parents and all those who dedicated themselves to the faithful transmission of the Faith in these troubled times.

This year 2020 will be very special for all the faithful attached to Tradition and to the spiritual family of the SSPX to celebrate such thanksgiving, as we celebrate the 50th anniversary of the foundation of our Society. Some people may forget about it, but as a matter of fact, the Society of St. Pius X was founded fifty
years ago with the full approval of Holy Mother the Church. Such approval was materialised on November 1, 1970, through a decree of Bishop Charrière, bishop of Fribourg, Lausanne and Geneva in Switzerland. To express our gratitude to Archbishop Marcel Lefebvre, founder of the Society of St. Pius X, who laboured
throughout his life to transmit what he had received, I will lead a pilgrimage to Lourdes and Ecône, in the footsteps of our venerated founder. See flyers.

On the day of the episcopal consecrations, Archbishop Lefebvre expressed the wish that the motto “Tradidi quod et Accepi” be inscribed on his tomb. Now, more than thirty years later, all those who benefit from the old Mass, within and without the SSPX ought to confess that Archbishop Lefebvre was really the man chosen by
God to save the most precious treasure that we keep in our hands, the Traditional Mass, and what comes along with it, the true Sacraments and the true Faith!

Because of the persecution against Tradition, the SSPX has been banned from the Mainstream Church for most of that time. But this painful seclusion shielded us from the corruption of faith and morals rampaging in the Modern Church.

But now there are some dangers arising from that situation of seclusion, especially because of its long-lasting character. In the early days of the battle, we were full of zeal for the defense of the Faith and of Tradition. But, after a while, there is a lassitude or fatigue from the present-day situation of the Church: when is
it going to come to an end? Will it come to an end? Then we would be tempted to give up the fight.

On the other side, there is another danger which may be even more critical, it is the one that may arise in the mind of people who considers that this situation of crisis of the Church is something normal, and that we have to get used to that no matter what. The younger generation is more at risk with that because they do not
remember the way that the Church was before the crisis. Because of that, some may be tempted to feel a bit too comfortable with our present-day seclusion from the Mainstream Church, and thus abandon the idea of being in perfect union with the Pope and the Bishops. Of course, such perfect union is not possible at the moment, given the very confused things coming from Rome. But we have to look with supernatural hope for the day when the Pope and the Bishops will be truly Catholics. At that time, the SSPX with be on the front lines to restore the damage done to souls by the Council Vatican II and the reforms that followed it.

The same thing happened to the Hebrew people at the time of the Babylon exile. The ancients among the people were standing on the shore of the rivers of Babylon, weeping and crying over the lost city of Jerusalem, and reminding the young people that they were not allowed to sing the canticle of joy, the Alleluia, while
they were still in this land of exile, away from Jerusalem.

Like the Israelites, we are now somehow in exile: up to a point, we had to run for safety away from the official structure of the Church because it was being bombarded by Modernism. As long as the bombing over the Mainstream Church is still going on, we have to keep a distance for safety purposes, but when the bombing
will be over, there may still be some smoke and dust, so we will have to come back to help the Pope and the Bishops to repair the damage, and contribute to the restoration of all things in Christ, according to the motto of our Patron Saint, Pope St. Pius X.

When it will be? Only God knows. But there is something that we are absolutely sure of: it will happen, sooner or later. May this New Year bring us closer to that happy day, for the glory of God and the salvation of souls.

With all my best wishes for a Happy and Holy New Year!

On behalf of the priests and brothers of St. Michael’ s Priory and Our Lady of Mount Carmel Academy, all the best wishes for a Happy New Year, filled with blessings for all our families... and thank you for all the gifts received on the occasion of Christmas!