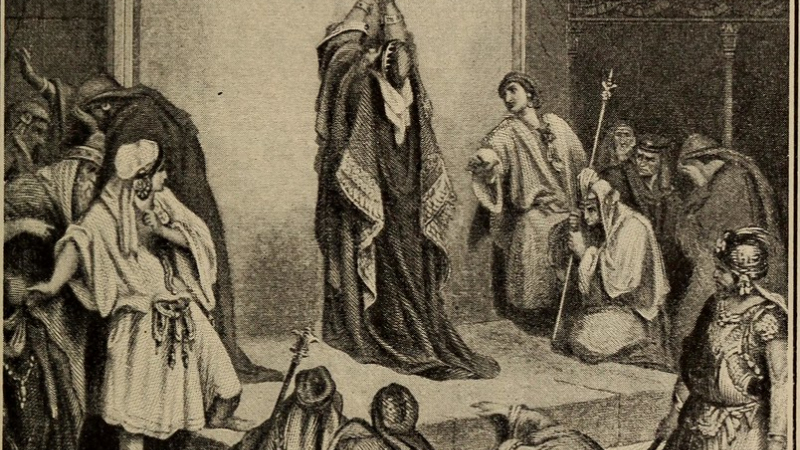 While imprisoned in Rome, and shortly before his martyrdom, St. Paul wrote a letter to Timothy, to exhort the young disciple to apply to his duties in the apostolate, making good use of the Holy Scripture, the Word of God: “All scripture, inspired of God, is profitable to teach, to reprove, to correct, to instruct in justice,”[1]

The advice given to the young shepherd of souls in the early years of Christianity is still valid in our times.  Holy Scripture was inspired by God, and men from all times can draw from it what is needed for the conduct of their personal life.

But the story that I would like to offer to your meditation today seems to be far from uplifting.  As a matter of fact, the story of David and Absalon is all about sin of adultery, fighting and blood, but it is reported in the Old Testament[2], for our instruction.

So, let us consider the revolt of Absalom against his father King David.  Absalom had been sent into exile by his father David, on account of the murder of his brother Amnon.  But Absalom, who was a very social man, was quite frustrated from being kept away from the ostentatious display of the royal court of King David in Jerusalem.

Moreover, Absalom was proud and very ambitious.  Thus, he conceived the project to be reinstated in the royal court of Jerusalem, eventually by means of overthrowing his father David and replacing him as king of Israel.

In order to achieve his perverted plans, Absalom dedicated himself to win popularity among the people of Israel.  He was greeting the people coming to the royal palace to be judged by the king, always giving his approval to their complaints, while having little concern about justice and equity. He was telling them that he was sorry to find out that nobody offered to help them till he came to their rescue, because the king is too old, and surrounded by ill advisers[3].   Little by little, he was gaining support and building up his own popularity at the expense of King David’s.

As he found a favourable time, Absalom went to Hebron where he was self-proclaimed king.  In a short time, all Israel followed Absalom, and David had no choice but to escape.

At he was running away for his life, David realised that the revolt of his own son Absalom was the chastisement permitted by God to punish him for the sin of adultery with Bethsabee.  As usual, David consulted God by means of the ephod, but God remained silent.  David interpreted that silence as a sign that he had to do more penance for his sin.

Later, it happened that a wicked man approached David, cursing and throwing stones at him: “come out, man of blood, man of Belial… The Lord hath given the kingdom into the hand of Absalom… because thou art a man of blood.”  Abisai, one of the companions of David, reacted right away: “why should this dead dog curse my lord the king?  I will go and cut off his head.”  But King David held his peace: “let him alone that he may curse as the Lord hath bidden him. Perhaps the Lord may look upon my affliction and render me good for the cursing of this day.”

David knew that the revolt of his son Absalom and the cursing that he was being subject were permitted by God as a chastisement for his past sins, and he accepted willingly these humiliations.

Eventually, God permitted that justice be made; Absalom was defeated, and King David was reinstated as king of Israel in Jerusalem.

Now, could we say that the story of David and Absalom is only something from the past, without consequences beyond their lifetime?  Not really.  On the contrary, I would like to explain how to use it as a key to understand some present-day events affecting us in 2019!

David was a holy man, but one day he fell into sin out of weakness, because he neglected the basic rules of the spiritual life: he stayed idle and neglected to stay away from the occasions of sin.  The fall of David was abyssal and led him to commit a series of mortal sins, in particular adultery and murder.

For a while, David was not feeling guilty at all, and it took the rebuke of Prophet Nathan to make him to start to realise the seriousness of his fault.  Later, the revolt of his own son Absalom led him to fully understand the situation.  At that time, David accepted this serious chastisement as the penance God requested him to do for his sins.  David willingly accomplished his penance, up to the point that and he is now venerated as one of the most holy men of the Old Testament.

On the other hand, Absalom was a very bright but ambitious man, looking for decorum and popularity.  When was working to build up support from the public, he was acting like few politicians of our times, whose main concern is to get into power, while promising more money for the people.  It is amazing to see how prevalent is that attitude, during the time of the electoral campaigns, as we can see right now in our country.  It seems that the real issues are ignored and rather replaced by some vague promises to pour the manna of the public funds onto greedy citizens.

Absalom’s only concern was to kick David out of power and replace as king over Israel. For a while, he was successful, and God permitted the holy King David to be persecuted by his own son, on account of his past sins.

The social reign of Our Lord Jesus-Christ, Son of David, has David has been overthrown outside of the public realm by modern-day “Absaloms”.  They reduce the meaning of the motto of Canada “A mari usque ad mare” (from sea to sea) to the mere secular and geographical field.  Rather, we should keep in mind that such motto is a verbatim quote from Psalm 71, in which Kind David express the extent of the reign of the Messiah to come, from sea to sea!

What lesson can we draw form that story?  Beware of modern-day Absaloms but work for the restoration of the reign of Christ, “Son of David”, the King of heaven and earth!