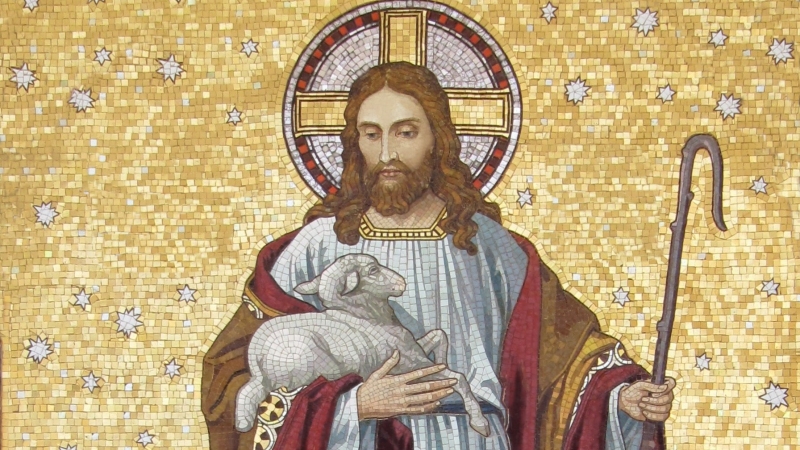 During the Easter season, as we contemplate the figure of Our Lord risen from the dead, let us focus on the title of Good Shepherd, one of His most famous titles. We are familiar with the expressions as “The Lord is my Shepherd” or “Jesus as The Good Shepherd”, by which Christians express their personal attachment to the person of Our Lord. But there is a need to sort out a few things, in order to recognize the true meaning of the title of Our Lord as the Good Shepherd in a Catholic fashion, that is to say in a traditional Catholic way.

But first of all, let us find out in what manner the title of Good Shepherd has been hijacked by modernists during the past fifty years. There is no doubt that, besides the introduction of the vernacular in the Mass, the inclusion of contemporary music in the liturgy was one of the most noticeable signs of the liturgical revolution that followed the Council Vatican II. One may remember the crazy days of the “folk Mass” with the guitar and all that new stuff that now we abhor.

Following these changes, an entire body of older Protestant hymnody and newly composed contemporary Catholic liturgical music was introduced in the new hymnal books. The treasure of the Traditional Catholic musical heritage of 2000 years was thrown out and being replaced by musical compositions that could be used either by Catholics or by Protestants. As a matter of fact, several pieces from the late 20th century Catholic corpus became commonplace among American mainline Protestants. The ecumenical intention of the reformers was obvious. They wanted a liturgy that could be use both by Catholics and Protestants in their religious services.

Fr. Joseph Gelineau, a French Jesuit was one of the most prolific composer of this modernCatholic musical pieces, and his influence spread not only within the French speaking areas, but also in the English-speaking world. Fr. Gelineau is well know for his hymn “The Lord is my shepherd.” Fr. Gelineau’s famous hymn fitted quite well with the ecumenical spirit of the New Liturgy, because, for many Protestants, the knowledge of Our Lord as a Good Shepherd is limited to Psalm 22: “The Lord ruleth me: and I shall want nothing.”

But now, the publication of the Traditional Roman Hymnal answered to the need of a hymnal book purified from the protestant spirit that infiltrated a number of Catholic church music compositions after the Council. Thanks to the Angelus Press, that released last summer the second edition of that book dedicated in filial gratitude to Archbishop Marcel Lefebvre, who initiated the “survival operation” of the traditional liturgy through the God-given Society of St. Pius X.

For us, Catholics faithful to tradition, the title of Our Lord as the Good Shepherd has a deep meaning, based to the words of Our Lord, addressed to the Pharisees: “The good shepherd giveth his life for his sheep” (John X, 11). According to Jesus, to be proved good; a shepherd must be prepared to give up his life fighting in defence of his sheep, which was fulfilled in Christ when He bore the Cross for us, that by His own death He might destroy the eternal death that men deserved because of their sins.

But the words of Our Lord I am the good shepherd, were first addressed to the Jews, to reproach them of their infidelity as was said by the voice of Ezechiel: “Thus saith the Lord God: Woe to the shepherds of Israel … the weak you have not strengthened, neither have you sought that which was lost... And my sheep were scattered, because there was no shepherd: and they became the prey of all the beasts of the field and were scattered… and there was none that sought them, none, I say, that sought them (Ezcch. xxjdv. 3).

These words of Ezechiel had a prophetic meaning, not only in the mouth of Our Lord, who condemned the hypocritical behaviour of the Pharisees, but also for our times. As a matter of fact, we can say that the crisis of the Church is a crisis of shepherds who are not leading the faithful as they should do. We were warned by Our Lord, who reminded his disciples a few hours before His Passion "All you shall be scandalized in me this night. For it is written: I will strike the shepherd, and the sheep of the flock shall be dispersed." (Matthew 26:31). Yes, indeed, the shepherd has been stricken, and the sheep scatter because they don’t receive proper guidance.

Now, here is a recent example, taken from a book whose title is The Lost Shepherd. Philip Lawler, the man that penned that book, is a respected Catholic commentator and former unconditional Pope-Francis supporter. The author of that book is outlining how the pontiff has become a “lost shepherd” who is “leading the Church away from the ancient sources of the faith.” Philip Lawler confessed that “for months, in my work reporting on the daily news from the Vatican, I did my best to provide reassurance – for my readers and sometimes for myself – that despite his sometimes-alarming remarks, Francis was not a radical, was not leading the Church away from the ancient sources of the faith. But gradually, reluctantly, painfully, I came to the conclusion that he was.” Lawler states as well that Francis is the most divisive Pope in modern times. “The Roman pontiff should be a focus of unity in the Church,” Lawler says in the book. “Francis, regrettably, has become a source of division.”

Our heart is broken when we witness how far the shepherds of the Church have been stricken by this crisis of the Church, which is a revolution affecting all levels of the life of the Church, up and including the top of its hierarchy.

But meanwhile, we should always remember the promises of Our Lord “the gates of hell shall not prevail against her”. That is why, during this Easter season, let us make reparation for the scandal of the confusion of the sheep, and pray the Good Shepherd so that He will send us good shepherds that will take good care of the faithful, and not be afraid to make the sacrifice of their life for the good of the sheep.