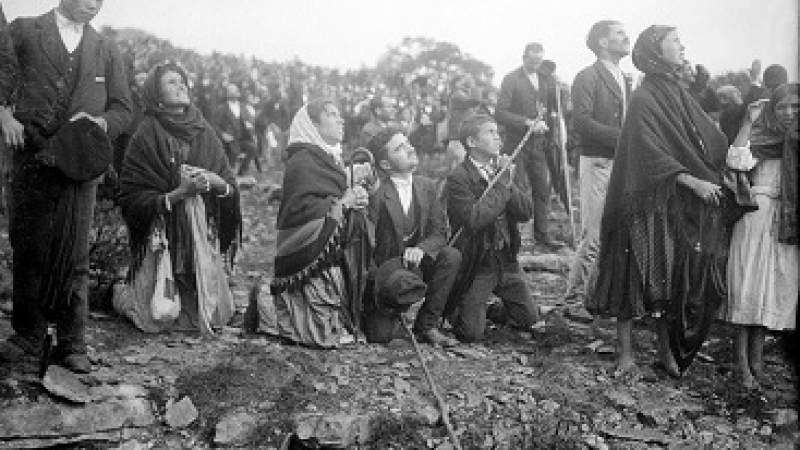 Let me give a brief summary of the events surrounding the August 13-19 apparition of Our Lady at Fatima.  On August 13, the day the fourth apparition was to take place, the seers were not at Cova da Iria.

They had been abducted by the mayor of Ourém, who was a freemason and an anticlerical fanatic.  Also known as “the Tinsmith”, this man attempted to force the children to reveal the secret entrusted to them in the apparition of July 13. The children held fast despite the mayor imprisoning them, and threatening to kill them by plunging them in boiling oil.  The children were not afraid of dying because it would have given them a chance to get faster to heaven.  However, it is reported that little Jacinta was crying because she would not have been able to see her parents again.

On August 13, at Cova da Iria, thunder, followed by lightning, was heard at the usual time.  The spectators noticed a small white cloud that hovered over the holm oak for a few minutes. A phenomena of coloration were observed on the faces of the people, the clothing, the trees, and the ground.  Our Lady had certainly come, but she had not found the seers.

On August 19, at about four o'clock in the afternoon, Lucia was with Francisco and another cousin at Valinhos, a property belonging to one of her uncles, when the atmospheric changes that preceded the apparitions of Our Lady at the Cova da Iria began to occur. Lucia sent quickly for Jacinta, who arrived in time to see Our Lady appear.

Lucy: What do You want of me?

Our Lady: I want you to continue to go to Cova da Iria on the thirteenth of each month and to continue to pray the Rosary every day. On the last month, I will perform the miracle for all to believe.

Lucy: I would like to ask you for the healing of some sick persons.

Our Lady: Yes, I shall cure some of them within a year. Becoming sadder, she recommended anew the practice of mortification, saying lastly, 'Pray, pray a great deal, and make sacrifice for sinners, for many souls go to hell because there is no one to sacrifice and pray for them.'

Now, here we are, 100 years later.  The message of Fatima is not something from the past, but it is still big on the news.  More than ever, countless of souls are heading to hell because the requests of Our Lady of Fatima have not been answered.  The consecration of Russia to the Immaculate Heart of Mary is still wanting, and many churchmen are still affected by a diabolical disorientation according to the words of

Sister Lucy.  Is it hopeless? Certainly not: all of us are concerned by Fatima, and can help to spread that message till the happy day when the Pope will consecrate Russia to the Immaculate Heart of Mary.

Meanwhile, within a few days, I will have the privilege to head for Fatima with a group of pilgrims from Ontario.  We will be attending the ceremonies of the SSPX international pilgrimage in honour of the 100th anniversary of Fatima.  On that occasion, be assured we will present to Our Lady of Fatima the intentions of our faithful and their families.

May the Sorrowful and Immaculate Heart of Mary be our refuge and our consolation in this valley of tears, and the sure path to heaven!